.
TOP
We use cookies on our websites.
If you continue browsing, we’ll assume that you agree. 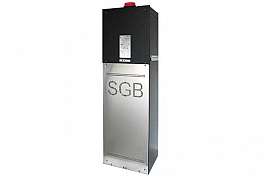 For increasing, move mouse over the picture
Leak detection unit LDU14 based on air overpressure for the monitoring of up to 12 underground tanks and up to 12 pipes at filling stations.

STORED/CONVEYED PRODUCTS:
Water-polluting liquids. The (possible) explosive vapor-air mixtures (also such ones that can arise through the stored/conveyed liquids in contact with air, humidity, condensation or the materials used) must be classifiable into gas group II A to II B as well as in the temperature code T1 to T3. Examples: petrol, diesel, AdBlue.

INSTALLATION:
Installation outside the Ex area or in areas in which zone 1 does not exceed a height of 1 meter

The requirements of the respective documentation must be observed!