.
TOP
We use cookies on our websites.
If you continue browsing, we’ll assume that you agree.
Allow the following cookies
Show
Show 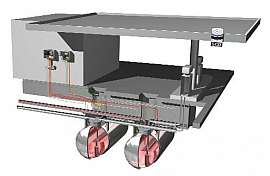 For increasing, move mouse over the picture
FOR MONITORING TANKS:

Tanks with a test pressure of the interstitial space >= 400 mbar

Pressure leak monitoring may be impossible for technical reasons, e.g. if the test pressure in the interstitial space is too low or if the system has been changed over from liquid leak detection. In this case, monitoring of the tanks with explosion-proof vacuum leak detectors is an alternative:
VLXE 330 M

At filling stations with a pressure system (submersible pump in the tank), pipes are monitored with an explosion-proof vacuum leak detector:
VLX 330 A-Ex

At filling stations with a suction system (pump is in the fuel dispenser), pipes are monitored with an explosion-proof vacuum leak detector with at least 500 mbar alarm underpressure.